I’m feeling uneasy. I have been for more than a few weeks now. The reason is rather simple – the end of my studies and my term as speaker of the student government is nearing and thus my life is about to change. It is inevitable, although the exact timeframe and the extent are not clear yet. Which is the very reason I’m feeling uneasy. I’ve been in this place before, after the end of my previous course of studies. Back in late 2008 I did not have a clue what to do. I had a rough idea of my interests, but no direction, no aim, no goal. It was ugly, one of the worst periods of my life. Not knowing what to do is horribly uncomfortable after a while. And it starts to feel that way again, the indecisiveness is creeping back into my life. In an attempt to learn from my past I want to take some time and sort my thoughts to properly come to a decision.
This will also serve me as a basis for seeking advice from friends and colleagues without having to tell everyone the same stuff over and over again. Yes, I am that lazy. Sorry, time is money.

As I already said a few weeks ago: “I’d like to accomplish even more." – which is not to say that I think I’m not accomplishing enough at the moment. But there are other things I’d like to spend time on. In that sense I do not have enough time. Being speaker of the student government, writing my bachelor’s thesis, studying and working don’t leave a lot of spare time. I won’t bore you with details but my private life has also been quite time consuming lately.

Simple: I don’t have enough. I’m not asking for pity, but in assessing my current situation, money sadly is a huge factor. Last year I got a shiny new laptop – after many months of living with the problems of my old one as I was afraid and too proud to ask my relatives for help. In order to be able to afford studying I have to work. My parents support me, but most months I need more money than I have even after what they can afford to help me with. It’s a constant struggle – basically I live from birthday to Christmas and the other way around.
As I changed my course of studies after the fourth semester I’m not eligible [§ 7 (3)] for BAföG – an extremely hostile rule. However, I don’t need much money, I’ve always been rather spartan. It’s just that not being able to pay my rent on time every few months is really stressful.
I’m very optimistic that keeping a budget will improve my situation, and the chances to get that scholarship I’ve applied for are not the worst as well.

Lately I noticed becoming increasingly tired of this part of my life in some aspects. Maybe the reason for this is that it has become routine and is neither thrilling nor particularly rewarding any longer. I wonder whether only I feel that way about it. A wise friend once told me: “The top is a lonely place." – there is a lot of truth to that. Nevertheless, there is still plenty I enjoy tremendously about it. Moments in which it feels like the job was made for me. Moments like that are the very reason I decided to tackle this challenge in the first place a year ago. Back then I didn’t even think about not doing a second term. I was certain I’d continue studying here in pursuit of a master’s degree, so it was the obvious choice to keep exercising this beloved duty of mine.
This job comes with a lot of responsibility – which I usually like but also dread sometimes, especially when I’m overstrained due to lack of being able to delegate. That, however, is a self-made problem: Of course, some things really cannot be delegated, and sometimes no one volunteers to help. But too often I’m unable to let things go because of some bullshit prejudice along the lines of “It won’t be good enough if I don’t do it myself."

Today, April 9th 2013, I spoke less at this biannual event myself than ever before. My colleagues did a superb job in my place.

Accepting that it doesn’t really matter that much, and that other people will obviously do things differently but still do them and might do them just as well is something I still need more getting used to. I was forced to start delegating more in the past months and I am very pleased with the results. As delegation is necessary in order to transfer knowledge to my eventual successor and the rest of the group, I’m quite fond of the idea to try and do a second term under the premise of maximum delegation.

I’m pretty tired of studying for exams. I’m sick of forcing myself to waste time and energy on things that are not relevant to my interests. Sadly, large parts of my studies fall into that category. I realize that they can still help you “learn to learn” and that sometimes you only see the advantages later on, but I understood that now. Loud and clear. It feels like there was a certain point this phase of life was supposed to teach me and I got the lesson. In ten years from now I’ll probably want to slap myself in the face for this high-handedness. But still, I’ve been studying for 6 years now and I’m not sure how much I would benefit from keeping at it. Getting a master’s degree was always part of my plan when it was still far in the future. Now that it’s coming closer I’m asking myself if it’s really worth two more years.

This is where the above two categories clash with reality. There is so many things I’d like to do. I still miss podcasting immensely and would like to continue pursuing that path, possibly as even more than just a hobby. I have a few ideas for websites I’d like to create, some of them more serious than others, some just little experiments for myself, but all of them constantly floating around in my head. I’d like to blog more often – and not in the bad way of feeling compelled to write more but not knowing what to write about. There’s currently five drafts for postings that are a little less meta than the last three waiting to be finished.
I’m way behind “schedule” with movies and TV shows, which will always be a passion of mine. The last time I went to the cinema (or a concert for that matter, I used to go every few months) was almost a year ago. I’d like to do more sports, I want to learn another language and more programming languages. I honestly can’t remember when I went out the last time. But I most certainly can remember the last time I had to give a friend a rain check, it was just a few days ago.

After this brief survey of my life it is fairly obvious what two questions will shape my medium-term future:

I’ve thought long and hard about many possible answers to those questions. 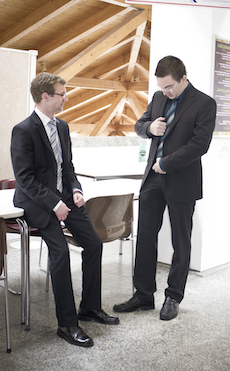 With a degree in computer sciences I probably won’t have too much trouble finding a job. But where do I want to work? While browsing a few job advertisements most of their descriptions didn’t appeal to me at all. I would really love to finally make my own money, but I’m also wondering about the differences in salary and promotion prospects between a bachelor’s and a master’s degree. Furthermore, without the latter I couldn’t start an academic career at the university, which is something I definitely consider.
Another option in this path is self-employment – actually I’m fairly certain that sooner or later this would be where I’d want to end up. I’m curiously following the start-up scene and apart from the fact that I probably wouldn’t make more money than now it’s very tempting to follow that path. 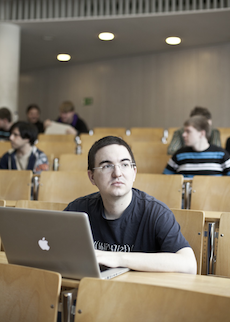 Going abroad is very expensive and requires a lot of planning, so it will most likely remain a dream (for the time being). Within my reach I could not find a masters programme appealing enough to justify the hassles of moving and potentially having to do more math courses as a requirement. So if I decide to keep studying I will almost certainly stay in Passau. Thus, instead of being divided in Passau and Elsewhere this section offers two delicious choices.

Not running for office again would greatly increase the amount of spare time in my life. But I’d also miss it. I’m not sure how hard it might be to still live and study here without being in the position of “calling the shots” any longer. Also my circle of friends is almost exclusively consisting of other student representatives. Of course those friendships can be maintained either way, but in the worst case this could result in a difficult choice. It might be even harder for me to really break away from the job because I’d still mostly be surrounded by its topics or I’d get alienated from my friends.

Supersize me: Do you want student government with that?

One thing I know for sure: I won’t do another term like this one – it was a lot of fun and it was very fulfilling at times, but I’m not willing to put that much time and energy into it for another year. That does not seem as a big problem, though. As I said, delegating more did work quite well during the last weeks. Nevertheless, I’m still afraid I might not be able to cut back on my efforts enough. Considering the many things I’d like to pursue, I will need more time to do my own thing if I don’t want to go mad sooner or later.

Well, I don’t know exactly. I have a strong tendency and writing all this down and sorting my thoughts in the process did indeed encourage me further that my impulse is right. As I’d like to get as much unbiased advice as possible on this I won’t state it here, though.
Please let me know if you have any thoughts on what I wrote – did I miss something completely, did I grossly misstate something, is my judgment off somewhere? I’m more than happy to answer follow-up questions, just drop me a line. E-mail, Twitter, ADN, anywhere you’d like.