Guess who’s bach? Bach again! I’ve been wanting to start this for quite some time now, pretty much right from the moment I first heard of Octopress back in July. I love it when software (or any project for that matter) is so inspiringly good that you just want to use or play around with it. Most recently this happened to me with trakt.tv, leading me to almost instantly write about 1500 LOC for this little API playground. But let’s keep the focus on Octopress. Ever since my previous outlet closed its doors, I’ve been missing the regular chance to burden the world with my opinions. Sadly, podcasting still is not an option anymore. As much fun as it’s always been it simply consumes too much time when done with the standards I’ve had set for ourselves.

Just like it took me almost two months after first noticing Octopress until I finally installed it (in about 15 minutes, it’s that easy), this post has been in draft state for about twice as long. Having this possibility of taking as long as I need for an entry is my main reason for going back to the text-based medium of a blog. Parts of what you’re reading was written during my recent trip to Google Munich, parts while “enjoying” the latest season of Weeds from my bed, parts while waiting for servers to reboot at work, and so on. Not possible to do with a podcast, at least not without an extreme post-production workload.
Furthermore, while I still prefer the more personal way of conveying what you want to say by actually saying rather than typing it, I’m not quite sure about how I’d feel about doing it without partners.

Being a passionate person with a tendency to fanboyism, I feel compelled to explain why I think Octopress is the best fit for what I want. I will do so in the professional manner of discrediting alternatives.

Not too much to say here. In all fairness, I’ve not done too much with WP ever since version 2.9 - but before that I even developed several plugins and therefore looked deep into its core. I still have nightmares sometimes. Nonetheless, WordPress is a good thing when used for the right purpose, I’m simply not the target audience any longer.

I like Tumblr, I really do. I’ve had the incredible luck that one of my entries was being featured on Tumblr’s radar - in the aftermath of that I’ve garnered more than 10k followers. Interacting with many of them is a very enjoyable experience in which I sometimes get lost for way too long. However, I’ve always found it being a pain in the ass for text-based entries, especially when they contain code-blocks. As much of what I plan to post here will be of that nature, Tumblr is not an option. I’ll obviously maintain my current account for what Tumblr is best for: saving my favorite funny pictures from reddit.

Of course there are other options. Alternatives to WordPress in the “serious blogging” section and Tumblr-alternatives like Soup and Posterous. Despite its flaws I have always found Tumblr superior to any of these, so naturally they’re out of the race. Relevant WordPress competitors lack my favorite Octopress feature: static generation. I know that Octopress isn’t the only static blogging framework, so to close for today I’ll just address one last question: 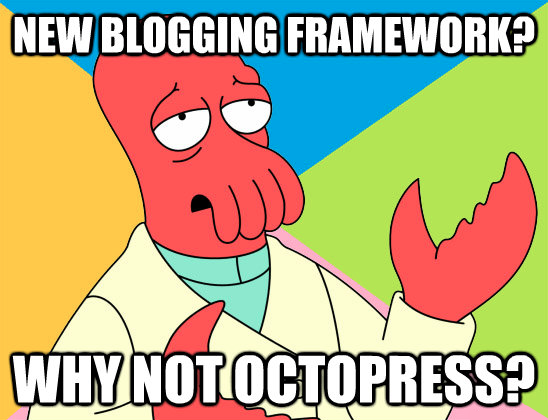 Find me a kick-ass static blogging framework that has a logo better suited to be a Zoidberg stand-in and I might give it a shot. (Disclaimer: I do know that Zoidberg is in fact not an octopus.)

That’s tomorrow & that is it for me today, I’m not Bill O’Reilly and here to play us out is not Sting. Expect more, but don’t expect it soon.